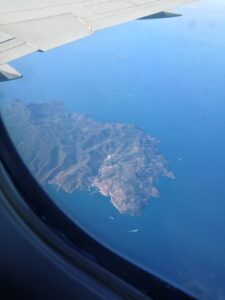 Monte Argentario, off the coast of southern Tuscany

Emeralds in a sea of sapphire—gems among gemstones—to a romantic dreamer. To those who have removed the rose-colored glasses, perhaps they emerge more like mounds of painted paper–mâché, conjuring memories of childhood social studies projects.  Or maybe other memories come into focus—the 1970s TV drama Fantasy Island, where Ricardo Montalban welcomed guests seeking secret desires. For one who lives most days in a landlocked state, visions of islands promise a bit of the utopian.  As I see them surging up from the blue, I sense my spirits quicken with the mysteriousness of the unknown. A magical world of possibilities seems to lie beneath me.

For Herman Melville, it was the Marquesas on the horizon. They became the setting of his first novel, Typee (1846). Sick of the ship on which he labored, and even more tired of the tyrannical leadership he abhorred, he set off with a willing comrade upon an adventure he thought would be idyllic.* For me—no reaction to tyranny–merely a spirit of adventure married to the fatigue of campus life led me to my first island experience in 2009.

Sicily’s Catania—under the shadow of the volcanic Mount Etna—promised an escape from the Ozarks during my sabbatical year. To be a bit more specific, I’d gambled and won with a Fulbright application—awarded a teaching position abroad. 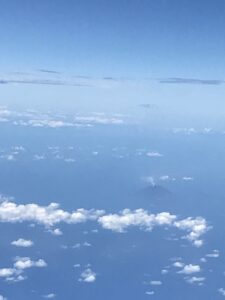 Zoom in to see Sicily’s Mount Etna with smoke rising 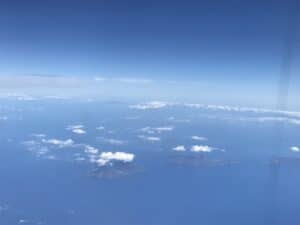 The Aeolian Islands, enchanting to Odysseus, rising from the sea near Sicily 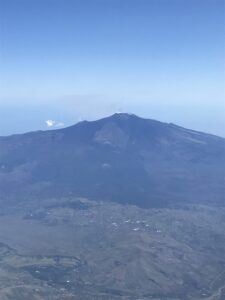 But like Melville and his autobiographical narrator, Tommo, I learned in the days after landing that island life for a non-native Anglo visitor possessed other than the utopian dreams that had filled my sleeping and waking hours for almost a year. Certainly, I didn’t face indigenous peoples described as “cannibals” and “savages,” as Tommo did. It wasn’t simply that prior language studies and short stints elsewhere in Italy limited my communications with locals. They spoke, I told my husband by phone before he arrived to join me, as if they were rolling rocks around their tongues—as if they had grabbed a handful of the stony seacoast to stave off their morning hunger. In fact, they were no different in their speaking than Ozarkers with chews of tobacco. Easy enough for another local to understand—but for an outsider—not at all. 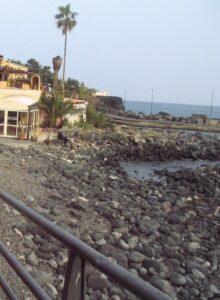 Inadequate preparation for the January rainy season added to my misery. My clothes were for milder weather, and my apartment’s heat supply would not knock off the damp chill. (A friend later told me that he, likewise unprepared, had been miserable during the winter months on Crete.)

The term “utopia,” dating back to Thomas More’s 16th–century work of that title, is a pun on Greek words signifying the “good place” that is “no place.”

And it wasn’t simply that the city lacked verdure—void of almost any vegetation. Certainly, Sicily rightfully boasts more than its share of natural beauty—be it bright snow on Etna, the Turkish Steps rising up from the sun-sparkled southern coast, or the flowers that bloom even in winter. 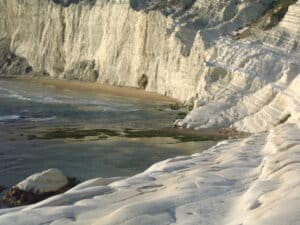 The problem was not Sicily—it was me.

I held my utopian visions tightly. To relinquish them would disturb my anticipated experiences of the semester abroad in what I had imagined as a tropical paradise. Irony of ironies! I was teaching “Utopian Visions” to university students. I knew that the term “utopia,” dating back to Thomas More’s 16th–century work of that title, is a pun on Greek words signifying the “good place” that is “no place.” By definition, utopia never exists—except in the imagination. My challenge, then—a taxing one for planners and control freaks—was to let go.

The problem was not Sicily—it was me. I held my utopian visions tightly.

Rather than smother the serendipitous, I needed to let the unexpected experiences live. In short, they did more than live. They pulsed and throve.

Among these vibrant experiences, the festival of Sant’Agata in early February and, following on its heels, Carnivale, exploded like the swollen orange and almond blossoms. They helped me see Sicily beyond the university classroom. But my courses helped. Students eager to offer insights suggested where I should go, what we should see. (My husband and sons had joined me after my first month). 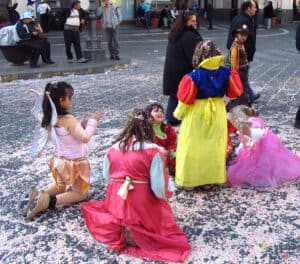 Confetti and Costumes to Celebrate Carnivale in Acireale, not far from Catania 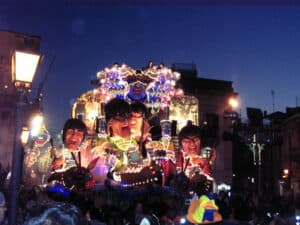 A colleague invited us to a party with a balcony view of the Sant’Agata parade—during which members of the local guilds carried huge candles hoisting them up and down for moments of rest through their lengthy, overnight circuit of the city. Almost miraculously, as they rested and gasped for breath, they chanted their adoration for Catania’s patron saint. 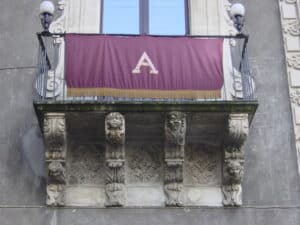 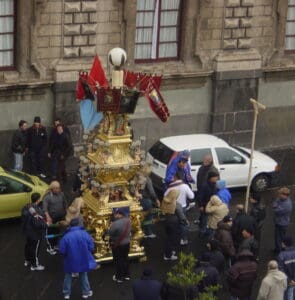 Members of a guild surround a “candelora” before the festivities begin, Catania  Wikimedia Commons

Agatha, a devout early Christian, had her breasts cut off by a Roman leader who wanted to take her virginity. Then, the story goes, she had to carry them on a platter.  Locals now consume sweetened ricotta “breasts,” each garnished with cherry, during this period. (Let Google help you find images of these “minni” or “minne”–or look at these links from loveSicily and ItalyMagazine. )

But what also happened during my work time abroad—yes, I was working—was that the classes on utopian visions in American literature and culture and on women’s travel writing laid the foundation for an idea which would become a book project: Engaging Italy: American Women’s Utopian Visions and Transnational Networks.

Beginnings of a Book

I had been teaching nineteenth-century American literature for years, and I knew many authors such as Nathaniel Hawthorne, Harriet Beecher Stowe, Mark Twain, Henry James and Edith Wharton wrote about Americans in Italy based on their time abroad. I became troubled by the language James and Twain used to describe Americans abroad—as part of a “museum” or “spectacle.” While I could visualize American tourists in that light, I also knew that there were American women such as war correspondent Margaret Fuller who had different experiences in Italy—they were more “engaged” than disengaged from the local culture. And so the work for Engaging Italy began.

I began to explore the stories of women who were more than tourists abroad. I settled upon three now-little-known women—Caroline Crane Marsh, Anne Hampton Brewster and Emily Bliss Gould—who each lived abroad for more than fifteen years and seized opportunities to be engaged in the Italian political changes of the 1860s and 70s known as Unification. 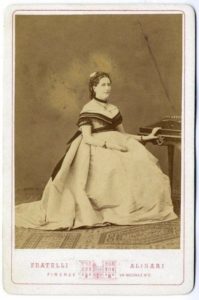 Brewster wrote weekly for US newspapers in Boston, Philadelphia, and across the country. (See another post about Brewster here). Gould wrote for two before devoting her attention fully to establishing an industrial school and orphanage and fundraising for it. Marsh, the US ambassador George Perkins Marsh’s wife, oversaw teachers for a girls’ school and orphanage, chaired committees affiliated with it, and managed a household full of family and guests.  (See another post about Marsh here).

These women chose to act abroad, even as they realized that life in Italy was not the utopia they first envisioned. Their stories do not speak simply of an easy escape by white women of privilege who chose to live in Italy during an era when the Civil War raged in the US and later during the nation’s reconstruction. None resembles the women James and Hawthorne depicted. They were not simply sipping fine wine and eating excellent bread and cheese. Instead, they wrestled with letting go of their utopian visions and determining how to live amid conditions that were, if not dystopian, more challenging for them than life in the US.

Of course, my interest in these women and the topic was prompted by my own experiences abroad, my prior teaching and writing in American literature, and many questions about my position at mid-life as a woman with a career and family. I did not resolve all those questions, but drafting the pages of Engaging Italy helped me work through many of them. I’ll be sharing more on the research and production process during the months to come–with tidbits about Italy which may interest you.  This post provides a small sampling.

I hope you’ll follow along through this blog or by subscribing to my newsletter. (What’s the difference between the two? Blog posts generally are shorter and you receive notification when they appear on the website. The newsletter, generally longer, will arrive straight to your inbox. It will include connections to what I am reading and teaching and to talks outside the university classroom). I promise not to inundate you—only once or twice monthly. And you can unsubscribe at any time.

As always, I am happy to respond to your comments and questions. Happy winter dreaming and armchair traveling!