Mary Taylor Simeti’s memoir of Sicily as an American expat will not be for everyone. But if you like poetic prose, peppered with references to classical Greece –think, Persephone, of the book’s title, or Pindar’s odes, from which the epigraph is drawn—this book’s for you.

–this book’s definitely for you. 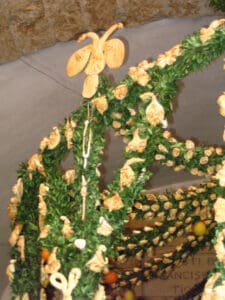 I picked up a library copy of Simeti’s book on the recommendation of food writer Elatia Harris. (Harris possesses encyclopedic knowledge of Italian and French foodways. See the FB group, Writing the Kitchen). How had I missed it while living five months in Sicily as a Fulbright professor? I suppose I was too busy experiencing the culture first-hand and preparing for my classes rather than reading about it.

As she writes in the author’s note, which reveals her attitude toward writing, gardening and time travel:

“I have approached the thorny issue of relating contemporary Sicilian folklore to classical Greek rites with the same blithe ignorance with which I approach my garden, putting in bits and pieces that appeal to me, with little regard for any theoretical framework. This journal has no scholarly pretensions and is not intended for those who debate the question professionally. I hope only to entertain those who know nothing of Sicily and to make their visit here more rewarding.”

Simeti sets up her story of a year of life in the 1980s with a prologue—the arrival of a young American woman alone, in 1962, in Palermo, to work at the Dolci Center—focused on social reform of Sicily’s widespread and well-known poverty. After this brief introduction to her personal past, the account moves forward quickly, blending her life with her family’s—a Sicilian husband, their son and daughter, and her husband’s family. Most importantly, she situates them within the Sicilian seasons and their traditions, which she explains begin with winter: “November is a time of beginnings in the double calendar that we follow in our family.” The grape and olive harvests have ended and school life has begun. 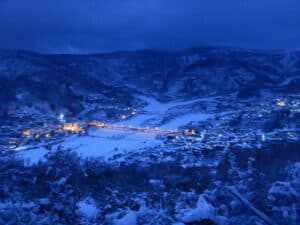 Fonachelli-Fantina in Winter. This community lies between Catania and Messina, not too far from where some of The Godfather was filmed–but on the other side of the island from Simeti’s book’s setting. As Simeti notes, each of Sicily’s three parts has a different feel and a slightly different heritage.  Photo: Shifegu, CC0, via Wikimedia Commons

Simeti’s opening and the book’s structure resonate with two other memoir-type tales of the natural world—both now much more famous among American readers: Henry David Thoreau’s Walden (1854) and Barbara Kingsolver’s Animal, Vegetable, Miracle (2007). Both call readers, as Simeti does, to consider a life closer to the earth’s natural seasons and cycles. Thoreau began with “Where I Lived and What I Lived For,” and explained that he declared his independence on July 4, when he went to the woods to “live deliberately.” His two years, two months and two days on Walden Pond, not far from the center of Concord, Massachusetts, Thoreau collapsed into a one-year cycle, captured in the book’s structure. Thoreau chose to end with spring and rebirth. Kingsolver, writing of a year in which her family left the arid southwest of Arizona to live and eat locally in Appalachia, began with Spring and took her family’s food year successfully through the winter.  (Acknowledgement due: Kingsolver co-authored with her husband, Steven L. Hopp,  and daughter Camille Kingsolver).

Although Kingsolver’s, Thoreau’s, and Simeti’s approaches and points are similar, their stories differ greatly. Just as not everyone loves Thoreau’s and Kingsolver’s works, certainly not everyone will care for Taylor’s. There are many of us, however, who thrive (and even survive!) on the attention to nature, food, family, and the poetic. I have decided to buy a copy and return the book on my desk to my local library. Someone else may be waiting for it.

I’ll be writing more about how Sicily and my Fulbright teaching months influenced my book project Engaging Italy in my upcoming newsletters and blogs. I would love to have you subscribe, if you have not already. Use the subscription box here, or send me a message through social media , and l’ll add you to the list.