A Valentine’s and Presidents’ Day Book: Precious and Adored

Here’s a book suited for both Valentine’s and Presidents’ Day. No, it’s not about Abigail and John Adams. Nor is it yet another account of Honest Abe and Mary Todd. But it is about a First Lady.  Melania? Michelle?  Hillary? Their love and marriage stories are certainly intriguing. But no, the story is not one of recent years. The First Lady was Rose Cleveland (1846-1918).

Rose served as First Lady in 1885-86, although she never was legally married. So what’s the story?

Lizzie Ehrenhalt and Tilly Laskey give the account in Precious and Adored: The Love Letters of Rose Cleveland and Evangeline Simpson Whipple, 1890-1918. The book appeared a year ago, but the story remains new and engaging–even though it speaks of a woman and a relationship that began in the 19th century. 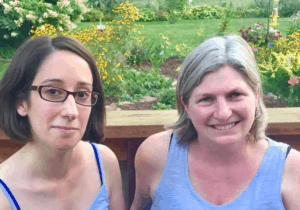 Rose became the official First Lady when her brother, the unmarried Grover Cleveland, became US President. (It was essential that the White House have a “First Lady,” of course). She remained in the position until he married. Not long after, Rose began writing to a “wealthy widow,” then Evangeline Marrs Simpson, whom she had met in Florida, sometime in the late 1880s. The rest, as they say, is history–and a fascinating love story. It includes the widow’s second marriage to Episcopal Bishop Henry Whipple in 1896 and Evangeline’s life with him in Minnesota.

Before that marriage, Rose and Evangeline had traveled to Europe and from north to south along the East Coast. (Both women owned property in Florida, where they wintered). And they frequently wrote to each other. The letters serve as a record of their changing relationship.

The letters serve as a record of their changing relationship. . . .

After Evangeline’s marriage to the Bishop, not surprisingly, the women’s relationship changed. Evangeline became engaged in Minnesota with women of indigenous tribes–the Dakota and the Anishinaabe, in particular. Rose occupied herself with writing and real estate. She wrote of strong female figures–such as Joan of Arc and the popular author George Eliot (a pseudonym for Mary Ann Evans). At one point she owned property in Maine, Florida and New York, and she was managing two businesses, as well as writing.

After the Bishop’s death in 1901, the women began seeing each other once again. In June of 1910, they left the US together for Italy. After a short period with Evangeline’s brother in Florence, the two settled in the Tuscan resort village of Bagni di Lucca. Rose died there in 1918, when the influenza epidemic (“the Spanish flu”) spread through Europe and the US. She, Evangeline and their friend Nelly Erichsen had all been involved in helping victims of World War I and the epidemic. (Biographies of Erichsen and of Rose and their activism and deaths at Bagni  are available here and here.) Although Evangeline did not die until 1930, and she then lived in London, she had already made plans to be laid to rest next to Rose in the English Cemetery at Bagni di Lucca.

This brief synopsis does not do justice to the story of the women’s lives. Erhenhalt and Laskey provide an excellent and thorough overview in the 56-page introduction to their book. The remaining pages are the love letters between the two women–a remarkable “inside view” of a near-thirty-year romance. Precious and Adored also includes about a dozen photos, a list of “characters” mentioned in the letters, and a Foreward by historian and scholar of sexuality Lillian Faderman.

Not the story many readers are likely to have imagined about a US First Lady,  Precious and Adored  reminds us that history holds many surprising pictures. We need only take the time to look at them to think differently about the past–as well as about the present situations that surround us.