It’s been two years since I’ve been in Italy—two long years—and I’m definitely feeling withdrawal. But pictures, memories, and my imagination help. A friend and fellow traveler of my last group trip said it well last week, “I so appreciate your pictures. I so want to think about going back, but I can’t let myself do more than enjoy the pictures right now.” There’s just too much going on, with the Covid Delta spike, mask mandate fights, and the start of school. And so we live vicariously with the pictures as prompts. Hope this newsletter will help you a bit as well. 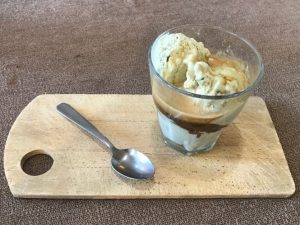 I’ve been debating whether this issue is summer or summer/fall, since it’s late August and nearly Labor Day, the traditional “end-of-summer” in the US. But since the heat is still here in my part of the world, I’m sticking with “summer.” This issue starts with late-summer longings and a book review,  includes an update on my book Engaging Italy and upcoming talks, and some “off-the-beaten-path” travel advice. I hope you’ll stick with me through the end, perhaps see something new, and pass along any items of interest to your friends.

How, with this heat, could anyone be thinking about coffee? Some of us are diehards. If my addiction didn’t start in Italy, Italy at least contributed to it. It started in the chilly winter months with morning caffè latte or cappuccino and espresso after a midday meal. But I soon learned about super sweet caffè freddo, and granita di caffè, so before I was 21, I had what some of my friends refer to as “a healthy addiction.” 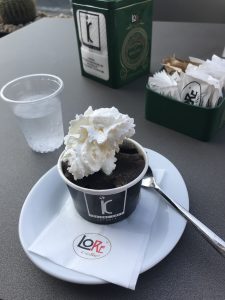 Granita di caffè in Sicily. In Italy’s south, many have granita with cream and a brioche for breakfast. I chose this one as an afternoon pick-me-up, without the brioche.

No comments now on the caffeine addiction and what it does to a body over the short and the long hauls, but I will say that in the heat of July and August, there’s nothing like a late afternoon gelato affogato al caffè. Visitors to Italy and citizens rave about gelato. I recall an apartment and research buddy at the American Academy in Rome venturing out every evening to get a cone, and my husband does the same whenever he is with me in Italy. 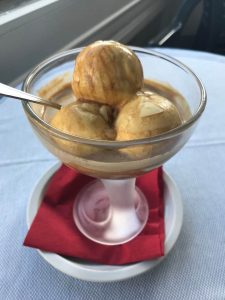 Another gelato affogato al caffè –this one with three scoops of coffee ice cream. Why not double or triple the fun?

But gelato affogato al caffè is my go-to favorite. No matter where I’ve ordered it—from the simplest corner bar to an elegant spot on a grand piazza—the ice cream smothered in hot espresso rises far above an American hot fudge sundae for me. Easy to replicate, right?

I have had a few decent ones in the States (several, I confess, made by my own hands at home), but they are just not the same. Nothing beats those I have ordered while abroad—from Italy’s Piemonte, to Sicilia, or somewhere in between.

Is it the base ingredients? Or, more likely, the atmosphere and the flair with which it is served up? Artist friend and neighbor Jacqueline Warren shared a photo not long ago, and it prompted a brief online exchange, summed up simply like this: those espresso-drowned scoops elsewhere just don’t compare. Don’t try this at home. Yet once again failing to heed a warning, when these pictures aren’t enough to convince me that I will fall short, I try once again. 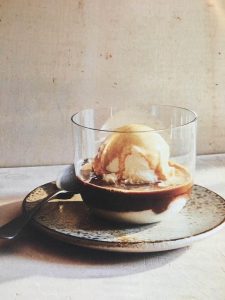 Espresso: The Art & Soul of Italy

Should you be one who loves even HOT, strong, Italian coffee in summer’s hottest months, then you’ll probably enjoy reading Wendy Pojmann’s Espresso: The Art and Soul of Italy. Pojmann’s account is an historical one, which traces the buying, roasting, selling of beans and preparations of their extracts from the earliest day. Have no fear, if you’re not an academic historian, like Pojmann (she teaches at New York’s Sienna College, in Albany). She writes with an engaging voice for a general audience. And she organized the book—a social and cultural history—by region. So it’s a bit of travel and foodie book. She enlivens the history with interviews–conversations with owners of famous coffee houses, from Turin in the Piedmont to Naples in the Mezzogiorno. 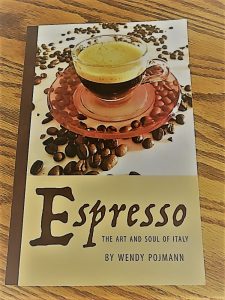 Wendy Pojmann’s Espresso: The Art & Soul of Italy is a cultural history of the bean and its consumption

Pojmann’s descriptions and analyses, then, go beyond describing how the making of coffee has changed through the decades, as technology has offered almost endless options for espresso-making at home. She also discusses the politics of the public places of coffee consumption. Some frequent travelers to Rome and students of Americans in Italy know the famous Caffè Greco, just a few steps away from the Piazza di Spagna and the Spanish Steps. This famous spot and other coffee houses–elsewhere in Rome and also in Turin and Naples— provided sites for the likeminded to gather and plot political activism. The coffee houses were not just about consuming caffeinated beverages.

Apart from politics, the book gives attention to coffee house décor. Initially meant to imitate the saloni of the homes of the Italian elite, the grand coffee houses of the nineteenth century offered an inviting atmosphere, with lush upholstery and lighting, gilded wood furniture and trim, and gleaming mirrors. Those without the means or environment to invite others into their “living rooms” at home could meet them in an impressive and inviting locale in the city center.

Among my favorite bits of information Pojmann provides are details about Turin’s famed bicerin—the creamy, thick, hot chocolate, espresso drink which I have yet to experience. I guess I’ve always visited Turin at a time when bicerin was not on my visual radar. Thanks to Pojmann’s book, I have some new tastes to try and some new coffee houses to visit.

I tend to be a budget traveler. I follow some friends’ advice: always pay more for your food than for your lodging. This advice doesn’t always work out well, but sometimes the trade off forgoing the luxury lodging and a locale with a luscious view  leads to a serendipitous discovery. Tuscany’s town of Prato just might be one of those. I traveled here for a conference and opted to stay in town rather than in the nearby Florence. I was not disappointed. If you’re headed to Tuscany, not sure you want to rent a rural villa, and interested in Euro-saving, you might try staying in Prato.

An easy train ride from Florence, Prato offers easy-to-negotiate pedestrian promenades, piazzas, and public parking for a rental car. Park the car and take the train to and from Florence or other worthy sites, such as Lucca and Pisa. Round trip tickets to Florence are approximately five euro, and trains leave about every half hour for the twenty-minute ride.

Prato boasts an open market with local produce and artisanal cheeses, honey, salume and olives, and for midday or evening meals, a selection of trattorias and other establishments. The lodgings range from hotels to rental apartments—but all for significantly less than similar establishments in Florence.

For the history and art lovers, the textile museum provides an overview of the community’s past and a sumptuous feast for the eyes. Examples of wool and silk fabrics from earlier centuries delight with color and texture. 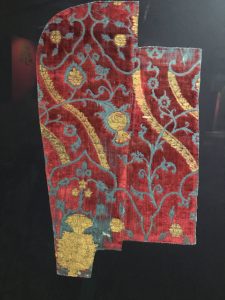 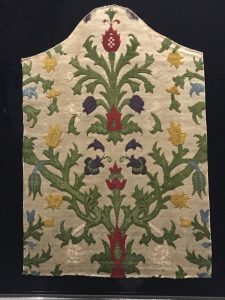 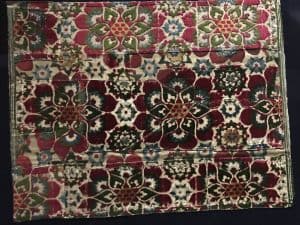 A third example, among the many I feasted my eyes upon in Prato’s textile museum. Too bad I couldn’t touch them!

The city of 250,000 people has been known as a top producer of textiles for years. As the industry has shifted, so has the city. Recent immigrants have established themselves in industry and also have begun to cater to tourists with their food traditions and products. 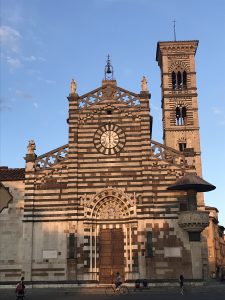 Yet Tuscan traditions remain alive as well. The cathedral of St. Stefano, which dates from the 10th century, boasts frescoes by Fra Lippo Lippi. The imposing structure casts a long morning shadow, glows in the late-afternoon sun, and draws leisurely evening admirers. 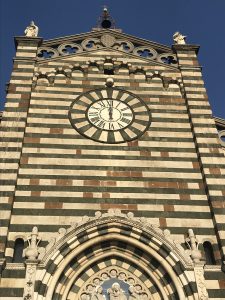 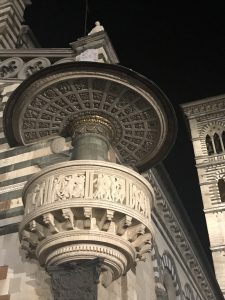 Exterior detail of Santo Stefano in the evening light. Can you imagine speaking to the piazza’s crowd from here?

From the evening passeggiata through the main shopping street and piazzas, to a dinner al fresco at one of traditional restaurants, the pleasures of Prato present themselves to travelers. I might just return to this “off-the-beaten-path” locale with my next group. 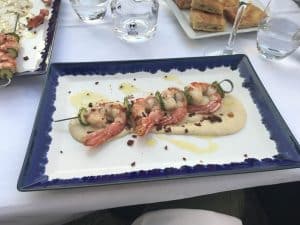 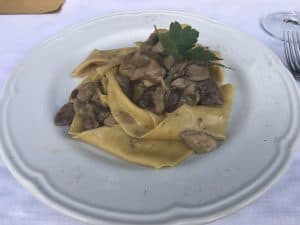 Handmade pasta with mushrooms, for those who savor earthy over oceanic flavors

Engaging Italy has a Release Date!

The last few weeks have been exciting, as far as my forthcoming book, Engaging Italy, is concerned. First, I received news that it’s officially “in production” and has been given release dates (yes, plural). The first is April 2022—for hardcover. The second is January 2023—for paperback. Although I’ve not seen prices yet, we know the paper will be much more affordable. I fear the hardcover may be more for libraries more than individuals. More to come on this topic in a later newsletter.

Second, I’ve been in communication with the team that generates the cover design. It’s supposed to be a surprise when it’s revealed. We’ll see. And third, an item related to the cover–a blurb for the back.

Finally, what lies ahead: the final copyediting. I’ve been given a short turn-around time for that process, so I’ve blocked off time this fall for this essential step of book production. The good news (for me) is that much of the hardest part of the project is behind. What began as the small speck of an idea so many years ago should materialize as a book next spring!

On the same day I received Engaging Italy’s release date, the Society for the Study of American Women Writers (SSAWW) announced their upcoming September 22 midday panel on Transatlantic networks, of which I am a part. You can connect to this free virtual event by registering here. This panel consists of professors, but I plan to make my talk accessible to all of you smart readers!

My talk, described in the “Upcoming Events” below, includes some gossipy details about 19th-century women in Italy. I could not fit these into the book! Hope some of you will tune in.

Remember, I love to receive suggestions–whether about films, books, people or places related to Italy. Please send yours my way . . .

Until next time,  keep reading, dreaming, and traveling!

“Negotiating Networks, Not Friendships, in Nineteenth-Century Rome” — Anne Hampton Brewster, Emily Bliss Gould, and Caroline Crane Marsh and their fraught relationships while living abroad.  Part of a roundtable discussion sponsored by the Society for the Study of American Women Writers. The working title is “Networking 19th-Century Style: Preserving and Analyzing American Women’s Networks.”

You can connect to this free virtual event by registering here.

This virtual presentation will comment on Rod Dreher’s bestselling book, The Benedict Option (2017), as it connects to traditions of communal life and utopian visions. As part of a panel at the Communal Studies Association (CSA) conference, conference registration is required.

This talk focuses on letters Caroline Crane Marsh exchanged with her sister Lucy during the Civil War. While Caroline lived in Italy, Lucy wrote from St. Louis and Florissant, Missouri, of the ravages of family, friends, and strangers she witnessed in the region.

Part of the Society for the Study of American Women Writers (SSAWW) conference in Baltimore. Conference registration required. More information is available here.

As always, let me know if you are part of a group interested in organizing a talk or trip.