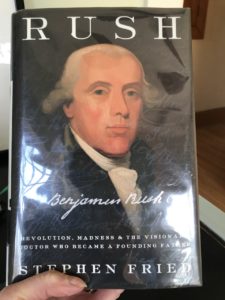 Mel Ulm’s recent review of Stephen Fried’s biography of Benjamin Rush prompted me to revisit my writing and research on #BenjaminRush from year’s ago. So when Springfield’s David Cornelison contacted me a couple of weeks later about an interview regarding my interdisciplinary work in early American literature and science for #KSMU‘s #STEMSpots, I said “sure!”

Then, the anxiety crept in.

I am a dabbler–and that’s dangerous. My first disclaimer to David pronounced this precarious position. He propped me up by asking some great questions about how I incorporate “men of science” into my teaching of American literature, and we bounced around from Rush to Benjamin Franklin to Cotton Mather and Jonathan Edwards and Henry David Thoreau–and their relevance today (that’s the most important part!) Hope you’ll tune in to listen.

We did discuss these men’s positions of power and how that provided them–relatively speaking–the ability to obsess over their inquiries. We should all be so passionate in our pursuits of what we believe will make the world a better place.

What we didn’t have time for–an egregious absence–was women of science. Perhaps that will come later. Tina Gianquitto’s work on nineteenth-century figures brought much-needed attention to women’s scientific work about a decade ago.  She wrote of Almira Phelps, Margaret Fuller, Susan Fenimore Cooper, and Mary Treat. (Follow Tina’s current project through the website Herbaria). Sharon Harris and Theresa Kaminski have brought attention to Mary Walker, one of the earliest recognized female physicians in the US. And Renee Bergland’s biography of astronomer Maria Mitchell informs my project on American women in Italy. Mitchell traveled abroad as a “professional,” visiting other astronomers and their observatories.

If I get another chance to chat with David, I’ll be ready to talk about some of these women.

The short STEM Spot  aired February 13 and then a longer version became available through the #KSMU & #NPR websites. It’s accessible through this link.