Think of Anne Hampton Brewster as a precursor to NPR’s Sylvia Poggioli. American, female, news correspondent in Rome,  writing stories followed by many in the US.  The similarities stop there. Brewster, a Philadelphian, left for Italy 150 years ago. She began her news correspondence later in life,  in 1868, when she was  well-beyond age 40.  Looking forward to this new chapter in her career,  she had no idea she would send back to America more than 500 “letters,” appearing in papers from North to South, Atlantic to Pacific. Her “later vocation” prompted me to explore her life–one part of my current book project.

Regular readers of the Philadelphia Evening Bulletin and Boston Daily Advertiser knew Brewster’s name and looked forward to her news from Rome. Other writing agreements flooded in, so that her accounts appeared in the New York World, the Chicago Daily News,  the Cincinnati Commerical and numerous other papers. Why, then, is Brewster’s name now unknown? 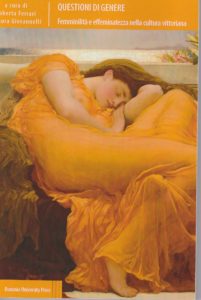 My essay in Questioni di Genere  (Questions of Gender), provides an answer. It describes Brewster’s sometimes crafty choices and, at other times, self-destructive decisions. These allowed her to make connections with men in Rome like Rodolfo Lanciani, a “social climber” himself. Lanciani became a civic leader, an expert on excavations, and a professor at the prestigious La Sapienza, Rome’s premier university.  He lectured at prominent venues throughout the US, including Harvard and Johns Hopkins. While Brewster’s relationship with Lanciani was, at first, one that might be deemed “mutually beneficial,” it went awry. He achieved fame.  She fell to obscurity. He married another US citizen. She remained the single “Miss Brewster.”

He achieved fame.  She fell to obscurity. He married another US citizen. She remained the single “Miss Brewster.”

I explore just how and why the relationship went wrong, as the essay traces Brewster’s time in Rome, at the Tuscan resort town Bagni di Lucca in 1873, and afterward.  Brewster was never a sleeping beauty, as the cover image of Questioni di Genere may suggest. In fact, Frederic Leighton’s dramatic oil painting Flaming June  appeared after Brewster’s death in Siena in 1892. At that point she was more than 70. Even twenty years earlier, when Brewster posed for another type of portrait, she was far from a blazing beauty.

Elegant or Assertive–How Should a Woman Writer  Be? 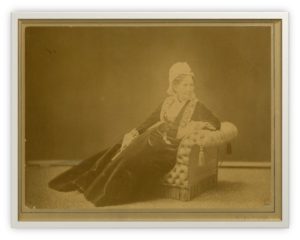 This Carte de Visite photo, taken by the successful Fratelli d’Allessandri at the prime of Brewster’s Roman years, demonstrates her self-assurance and the elegance she wished to present. Known for wearing black velvet and diamonds when she hosted her regular evening receptions, the unmarried “Miss Annie” wanted to be a proper woman-of-leisure as well as a professional writer. The two desires did not mix well.

Brewster’s active life in social and professional circles–including Italians and Americans, men and women–reveal much of the life of a nineteenth-century career woman abroad.  Her story is a poignant one among many about Anglos in Italy that recently have engaged readers and writers of women’s history: Margaret Fuller, Jessie White Mario, Constance Fenimore Woolson, Harriet Hosmer, Louisa May Alcott . . . the list goes on.

Yet in spite of the similarities among these brave women of “genius,” as Anne Boyd Rioux, Kate  Culkin,  and Renee L. Bergland  aptly dub them, each one experienced professional life abroad differently. They brought with them diverse desires and haunting pasts, sexual preferences and religious stances.

Brewster, for example, had converted to Roman Catholicism as an adult in Philadelphia. She was wooed by both men and women in the US and abroad. But she died as a single woman in Siena, Tuscany, in 1892. Her story is worth remembering for what she offers all of us about journeys that take people around unexpected turns and across wide waters.

I hope you will follow as I share more about Anne Hampton Brewster and other women whose “later vocations” merit our attention. Her life motivated me to my current book project. In the process of learning about her, I have discovered many others. Some went to Italy. Others stayed in the US or traveled here from abroad.  I would love to receive feedback from you about how these women’s lives may inspire you–by triggering your memories or motivating you to move ahead.