As Italy crawls back to life, many of us mourn the loss of trips planned and cancelled. This week-after-semester’s-end at the university often finds me in flight across the Atlantic. For most of the last decade, returning to the peninsula I fell in love with during a study abroad semester has been an end-of-term ritual. Often those trips to Italy are with others–sometimes university students, sometimes life-long learners like me. This year was to be no different. 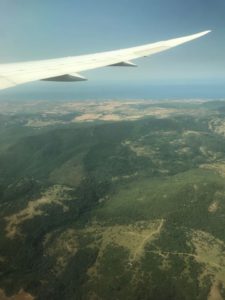 But the change of plans became official a couple of weeks ago. When the airlines sent the flight cancellation notice, I wiped off my calendar a group trip scheduled for late June. Our small group had anticipated the change, discussing it even in early March. Nonetheless, the message still delivered a sting of reality.

The trip would have been my fourth with a group of curious adults willing to follow my lead. Our goals?

Rome would have been a starting point. The Colosseum and St. Peter’s were to be mere touchstones, as these spots famous for early Christian martyrdom create the context for thinking about the ways in which religious life and cultures change over time.

Considering our own paths, our journeys would intertwine with what we would witness.  Passersby in the popular Piazza Barberini, for example, often miss the bones encasing the crypt of the Cappucin church in Via Veneto. Nathaniel Hawthorne twisted these into an evil scene in the Marble Faun. Yet we  would consider how they reflect a reverence for life and for death, admonishing us to think about our places in this Great Circle.

Another stop, Santa Pudenziana, originally a Roman bath house, is now a thriving Filipino congregation. Visit on a Sunday to experience a lively mass that exhibits ever-changing church life, but another morning allows a close up view of the apse mosaics. These date from the fourth century, demonstrating visions of Jesus and his disciples as Roman rulers–not uncommon imagery in these early Christian worship sites. Nearby, for example, the church of Santa Pressede offers similar mosaics and cool silence among central Rome’s heat. 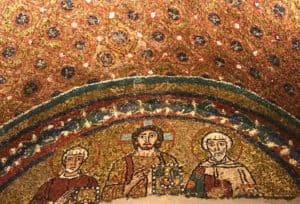 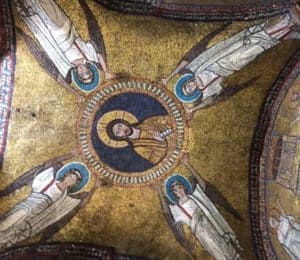 Other early imagery decorates the mausoleum of Santa Costanza, outside the city’s walls. Our group would travel east on the Via Nomentana to experience the explosive floral and organic imagery inside this burial site of Constantine’s daughter. An effusion of flowers and abundant grapes combine to create an almost Bacchanalian aura. They evoke celebrations a far cry from Victorian pearly gates, golden streets, and singing seraphim and cherubim. On the same campus, the body of Saint Agnes lies entombed, at the entrance to the underground catacombs that provide insights to other ancient burial practices.

These three ancient sites are not secret–certainly others visit them–but they are far from the madding crowds of central Rome, thronging the piazzas and streets winding from the Colosseum and the Campidoglio through the Campo dei Fiori, the Trevi Fountain and the Piazza Navona. We would visit these–Saint Agnes’s head is in the church bearing her name in the Piazza Navona–along with other “not secret sites” in the city. All ask the thoughtful to reflect on their own journeys within this larger context.

From Rome to Umbria and Arezzo 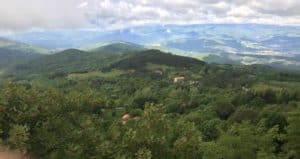 Our group after a few days would have escaped the urban hubub to the cool heights of La Verna. Perched aside a hilltop northeast of Arezzo, the village of La Verna sits sleepily. I learned of it while reading On Journey, the autobiography of social activist Vida Dutton Scudder (1861-1954), who visited regularly as she wrote a history of Saint Francis and his early followers. Further above the village, at the end of a drive that veers off a windy mountain road, the Franciscan Sanctuary that arose in the saint’s honor lies almost hidden in a thick forest. Arriving at the monastic sanctuary and guest house, I sense I’m following not only Francis’s footsteps but also Scudder’s.

Buffered by the dense foliage, the monastery and its inviting guest spaces inspire rather than intimidate. Of immediate note, the birds’ mesmerizing songs send spirits soaring. They speak the language of Francis’s life, known for a connection to animals. And they remind visitors of nature’s bounty, a far cry from the sounds of urban traffic. Rome’s sounds and diesel smells are also dissipated, as forest paths underfoot release their damp, earthy pungency. The paths, part of the larger system of The Way of St. Francis, lead to the nearby spot where the saint is said to have received his stigmata. Here our group would spend part of two days in times of silence, walking the trails and mediation. (Thanks to friend and former traveler Deborah Cox for giving me permission to share these four photos she took a few summers ago.) 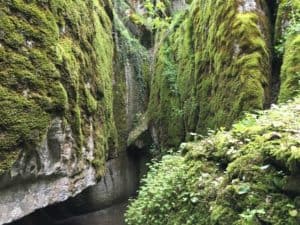 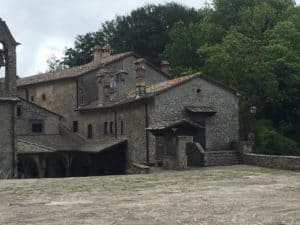 Other Sites of the Saints

Other sites associated with Francis would dot our travel. Lodging two nights in another monastic site in Assisi would allow us to begin and end our days with views that stimulate and stir the senses. Later, an easy morning’s drive would take us to Siena. Although both Siena and Assisi are thick with tourists, we would add some lesser seen sites to our days–like the home of Anne Hampton Brewster, Philadelphia journalist who died in Siena, after writing from Rome for twenty years. And of course we would visit sites associated with Saint Catherine, whose life also motivated Scudder’s writings and social activism. 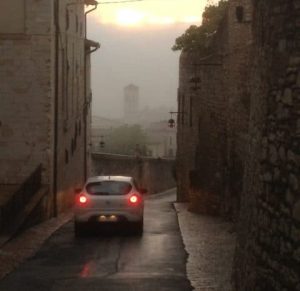 Assisi in the evening, when most tourists have vacated the streets 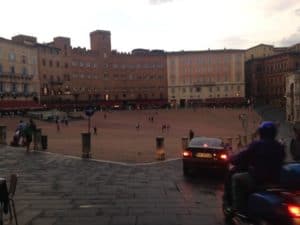 Siena’s campo, famed for its annual July horse race, the Palio, has fewer visitors after dark 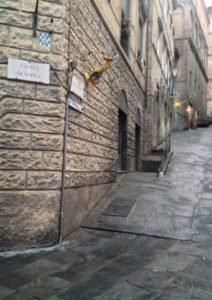 A quiet corner in Siena, with restricted auto travel, near the final home of American journalist Anne Hampton Brewster 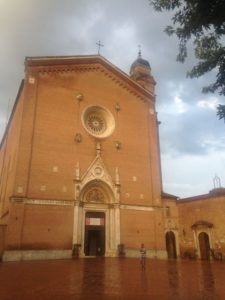 Along the Tuscan Coast and South

After Siena, a short stop in Porto Santo Stefano, would precede a longer pause in Tarquinia. In this ancient Roman town, an Etruscan necropolis reminds visitors that other civilizations predated the Romans. And Tarquinia’s peaceful streets speak to most travelers’ needs for time outside of tourist centers.

We would end our trip with another site similar in its beauty, history and distance from the crowds. Ostia Antica lies near Rome’s Leonardo da Vinci airport in Fiumicino, yet far away from its bustle. A national historic cite, the grand park offers an expanse of ruins that exhibit an almost pristine amphitheater, ancient toilets, and rich mosaics. The remnants of former worship sites, such as the Jewish synagogue, would remind us once again of how ancient Rome embraced diverse religions. Ostia also boasts beaches–so some of our group would stroll the lungomare, or venture into the sand to dip their toes into the Tyrrhenian Sea. Perhaps this touch, like throwing coins in the Trevi Fountain, would signify a journey that they hope to remember, if not repeat. 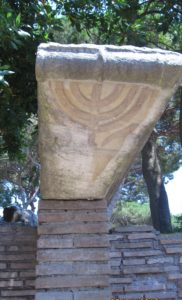 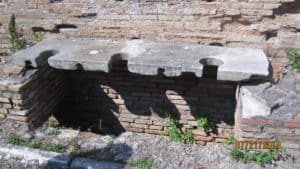 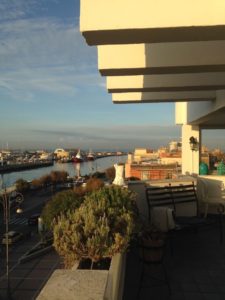 View of the Sea from Lodging in Ostia 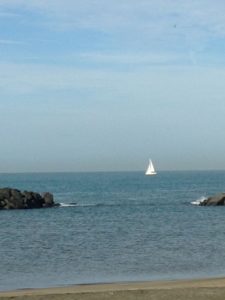 The Tyrrhenian Sea at Ostia

None of us knows what the future holds for us, but we plan nonetheless.  As far as travel is concerned, we wonder what’s next.  Some trips have been cancelled–others have been postponed. Our group trip is a mixture of the two. With the indefinite future ahead, we hope to know more by fall. Then, if possible, we’ll plan more specifics–new dates, new times, new itineraries. And perhaps even a few new travelers. Maybe you would be interested in joining the group? Or maybe you are part of another small group–a few couples, a few single friends–with whom you’d like to travel? If so, let me know.  One of my passions is advising, planning, and sometimes leading such small group trips. Contact me here or through Instagram, Facebook or Twitter.