Candace Millard and the Library Company 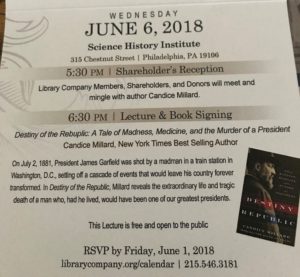 Missouri author Candace Millard speaks at this year’s annual dinner of one of my favorite places to conduct research, the Library Company of Philadelphia. Millard’s book on Garfield’s murder, Destiny of the Republic: A Tale of Madness Medicine and the Murder of a President  was my selection for the Thorpe Menn Award in 2012. Here’s a bit I wrote about it in my stint as judge for the American Association of University Women-Kansas City’s annual contest that year:

“Reading Millard’s book, I placed myself in the seat of an adult drawn to historical fiction and murder mysteries. Since I knew next to nothing about the topic, and I don’t usually read histories, historical fiction, or murder mysteries, I assumed the volume would be a challenge and was happy to see it included pictures and informative captions and source citations. Soon, however, I was swept up in the heroic and romantic rags-to-riches early life of James Garfield and his wife. I was intrigued by the background of Garfield’s deranged assassin, Charles Guiteau—fascinated to learn of his brief membership in the “free love” Perfectionist Oneida community, his numerous schemes to make and borrow money in Chicago, New York, and elsewhere, and his sense of personal destiny as murderer of the President.

I was intrigued by the background of Garfield’s deranged assassin, Charles Guiteau—fascinated to learn of his brief membership in the “free love” Perfectionist Oneida community, his numerous schemes to make and borrow money in Chicago, New York, and elsewhere, and his sense of personal destiny as murderer of the President.

Guiteau’s personality, along with details of the political conventions in Chicago, Chester Arthur’s position as Vice President, and scientist Alexander Graham Bell’s role in Garfield’ s medical treatment all intertwine to remind us that a shooting is never simply a shooting, nor is a death merely a death. Multiple factors and causes contribute to the complex social fabric in which each of us lives. It is the best historians and story tellers who provide us with glimpses of how and why events unfold as they do—enriching our understanding of humanity in the process.

This year’s finalists have several similarities . . . each is a work situated within a solid historical context; each is a history, and each was written by a woman. In addition to this similarity of genre—a genre usually associated with male writers—there is the odd similarity of subjects. Each of these three histories is notably not focused on women, nor does it zoom in on domestic life. Rather, all encompass issues of concern to culture that extends beyond gender. Each, as a social history, nonetheless reflects the female authors’ collective concern with issues touching the larger society—not merely those limited to or by gender. All three women writers are to be commended for their desires to touch and change the larger culture through their use of language and narrative. Each of the three finalists selected illustrates the gifts of literary women of Missouri.

This year, however, I select Candace Millard’s Destiny of the Republic as the Thorpe Menn award winner—for the overall strength of research, creativity and clarity of narrative voice and presentation.”

Looking back at what I wrote six years ago, I see that then I didn’t consider myself a reader of history a much as fiction. Now, I would write otherwise. As a reader and writer of “serious non-fiction,” I hope I will be asked to review and comment on many other works like Millard’s.

Also of note regarding Millard as an author: as a friend of the Provost at William Jewell College, Millard spoke this year at the annual dinner for my son’s Oxbridge program. Of course, he was surprised when I said I knew something of her work. Our conversation a few weeks ago sent me back to Destiny of the Republic and my thoughts of what it means to be a Missouri woman writer of serious non-fiction. It is inspiring to be surrounded by such award-winners.