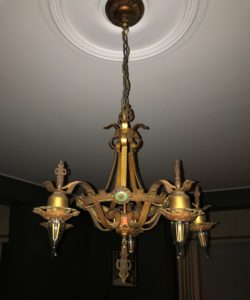 We finally have a “new” antique light in our dining room. After 18-plus years of wanting to gaze upon something other than a 1970s Victorian reproduction chandelier, we have made a change. Some of my friends who are architectural historians and preservationists may not like that this ornate pendant is Spanish Revival style and our home is not. But I love the light and the warm glow it casts in a space I already enjoyed as a gathering place for guests and family. It speaks to the value of leaning in to change. 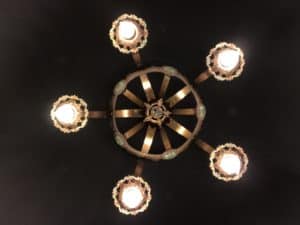 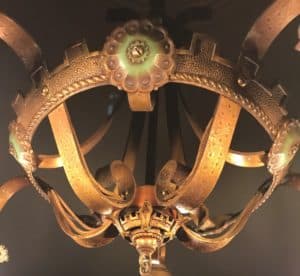 This “new” old fixture was a long time coming, and not without some challenges:

These are only a few of the questions which for me became roadblocks in taking a step. (I am sometimes slow to make decisions.) Each supposedly simple question seemed to stub my toe in the midst of an already complicated path of daily life, with work, family responsibilities, and social events.

And, quite frankly, we already had a dining room light that worked just fine. “If it ain’t broke, don’t fix it,” rumbles through my family background and my husband’s, and he’s my number one carpenter, engineer, and electrician. In short, he’s the light installer.

But I’m the major decision maker for choices related to our home, so I am the one who let this project take 18 years. I bear full responsibility for delaying the change. When I saw the results–you can easily imagine what I asked–why so long???!!!??

In fact, this whole light buying and installation process resonates for me with questions I have asked for years. Some people seem to make choices easily and move right ahead, diving in to the proverbial cold water without a thought of potential hypothermia, or stomach cramps, or not being able to swim well enough, or any one of the number of things that cause others to stand on the edge. Some of us hesitantly dangle a toe in the water.

But even once the change begins, its not always easy to continue without second-guessing and self-doubts. Being in the midst of change is not always easy. The light installation was not without some moments of chaos and confusion. 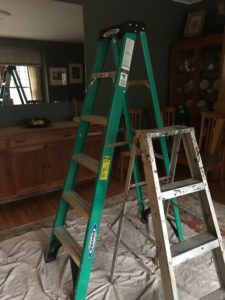 I think of the Mary Chapin Carpenter song, “He Thinks He’ll Keep Her.” The woman of the lyrics leaves her marriage and position as housewife, where for “15 years she had a job, and not one raise in pay,” where “she does the carpool, she PTAs” (yes, the lyrics use PTA as a verb). She does not drive herself into a fantastic fantasy position but finds herself “in the typing pool at minimum wage.”

“for 15 years she had a job, and not one raise in pay” – Mary Chapin Carpenter

The song, however, is not a depressed song of mourning. It celebrates the choice of change. It sings of the woman’s agency, making a decision to move from one 13-year tradition to begin a new one.

Mary Chapin Carpenter’s lyrics don’t lie about change being easy. It’s not without its challenges. But this woman, like many before her, stepped out of what had once been a comfortable path. When it became one of crippling discomfort, but before it killed her, she took action.

True, leaving a marriage of many years it not the same as changing a light fixture. But the point is, what pushes people to step out? What happens when they do? And what about people who are in life-relationships that seem to limit their abilities to change? How do they respond to opportunities beyond redecorating or traveling?

Many people—not just now but also before our time—provide examples that answer those questions. My reading and writing through the years has explored many of them, especially those who have left behind letters, journals and autobiographies that trace their paths. I will be sharing parts of some of their stories here. 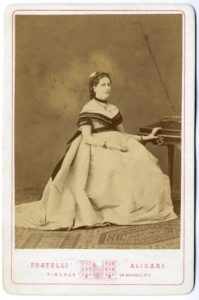 Most recently, I have been writing about Caroline Crane Marsh, the wife of a US ambassador who lived in Italy for more than twenty years. She, along with Anne Hampton Brewster, who left Philadelphia to become a newspaper correspondent in Rome, and Emily Bliss Gould, a New Yorker who established an industrial school and orphanage in Rome, are three women at the center of my book project on Italy and what I call their “later vocations.”

Last week I traveled to Denver, where I talked about Marsh, comparing her to two more radical and better-known women: Margaret Fuller and Germaine de Staël. I refer to Caroline Marsh as a “semi-feminist.” She did not push overtly for women’s roles to change, and she didn’t break the bounds of accepted behaviors in the realms of romance and sexuality, as Fuller and Staël did. As a woman married to a rather mountainous man and public figure, Caroline lived somewhat carefully in her husband George’s shadow.

But at least two loves link the three women—the Italian people and language study. They loved language study for how it opened up their worlds. As Staël wrote in On Germany, language study broadens knowledge beyond a person’s “own nation—a circle that is narrow” and “exclusive.” Focusing on children, in particular, she wrote, “the child who translates gradually perceives everything” about human communications. This perception through language study leads to “independence of thought.” 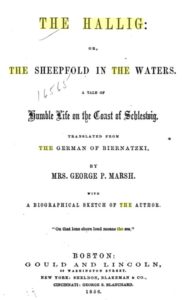 Title page from one of Caroline Marsh’s translated volumes

When you think about it, this quote is about change–change brought about by language study. Caroline Marsh translated books from German and studied Turkish when she lived in Constantinople, where her husband also was an ambassador. Later, in Italy, she would communicate in the local language as well as study French with her nieces. My longer writing on Caroline looks closely at how language study and juggling new responsibilities transformed her. She constantly faced changes brought about by her husband’s career rather than her own ideas. She continually had new homes–and new dining room lights–forced upon her!

Learn more about Caroline and other women negotiating change by following my Facebook author page, where I’ll be posting blogs about twice a month. Or, send me a message here to let me know you’d like to follow the blog. I’d also love to know your thoughts—about my posts, or about your own challenges with change. What advice or stories do you have about leaning in to change? What happened with these women in the past only gains value as we connect it to our lives today.