A Privileged Perspective: On Escaping A Stricken Field 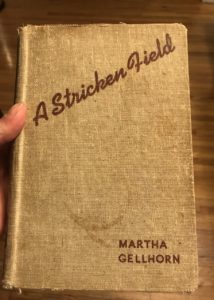 Cover of 1940 edition of Martha Gellhorn’s A Stricken Field

In January, reading Anne Boyd Rioux’s review essay of Martha Gellhorn’s A Stricken Field,  I was intrigued enough to order a copy. Rioux had written for LitHub that Gellhorn’s 1940 novel delivers “a gut-punch” as it “powerfully illustrates how Western societies fail in their duty to protect the most vulnerable among us: stateless and homeless refugees.”[i] I didn’t really want a “gut-punch” from reading about refugees. Instead, the novel’s setting in Prague, where my husband and I were headed in March, prompted me. I thought Gellhorn’s account would help me prepare for our planned spring break trip to the Czech Republic, where we would visit our son who was studying abroad. Put another way, we’d be escaping the late-winter doldrums of life in the isolated Ozarks.

Put another way, we’d be escaping the late-winter doldrums of life in the isolated Ozarks.

Gellhorn’s best-selling fictional account of the Nazi regime’s rise in power would be more interesting and engaging than Count Francis Lützow’s The Story of Prague (1902), another historical volume I had begun in hopes of educating myself. (The volume’s illustrations by Nelly Erichsen, a professional expatriate artist from England, had caught my eye—but she’s the subject of another article). I soon set that history aside, as Gellhorn’s journalist heroine sucked me in to her relationships—relationships both with young political activists she had befriended and her fellow journalists. 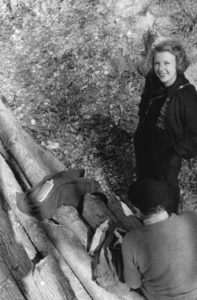 Described in heart wrenching and soulful scenes, without one bit of sentimentality, A Stricken Field provides a story of an occupation that arrived gradually—creeping in like a virus—until suddenly it has ravaged the entire city and destroyed those the journalist (and sensitive readers) have come to hold dearly. As the one character jokes nervously upon her arrival, “What, no pictures of Adolf in the windows yet?” But within a matter of days, the ancient city has been turned upside down.

Gellhorn’s account differs from Anne Frank’s famous diary,  not only because it’s fiction, but also because it captures the interiority of adults—more mature characters as they move about the city—even as they hide in isolation or huddle in quickly established “quarantine” housing for recently arrived exiles from Germany. Most notably, Gellhorn’s account differs from Frank’s in this mobility.

The mobility emerges through the movement of the journalist’s and the narrator’s privileged eyes, blurred by the perspectives Gellhorn’s crafting creates. She allows readers to witness scenes of passionate lovers in hiding—clinging to each other in moments of unknown futures; abuses of resistors, victimized by German authorities; and slight fears of news-following journalists. As readers, our eyes move from scene to horrific scene, often with the eye of the American journalist, Mary Douglas, who generally feels her position provides her safety.

The journalist’s choice, finally, like Frank’s, is to use writing as a tool. She will tell the story of her experience, as she smuggles documents in her suitcase so that the records will remain. Yet the journalist’s experience, she tells herself throughout the account and especially as she flees Prague in fear, is an experience of privilege, from a privileged position. The horrific life she witnessed in Prague, under Hitler’s regime, was not her own. She has credentials that will help her to escape it–and she has the documents that will help her tell the story.

Yes, journalists were traveling by plane in 1940, and the plane becomes the most fraught symbol of her mobility and privilege.

Culminating the novel’s numerous nerve-wracking scenes, the narrator moves through intimidating customs clearance questions at the airport. Yes, journalists were traveling by plane in 1940, and the plane becomes the most fraught symbol of her mobility and privilege. In fact, the novel opens inside a plane, where the narrator and journalist recognize that “the land looked the same as when they flew across France, summer green and rich.”  Were they “looking for . . . maybe a swastika painted on roof?”

By the circuitous return to the plane setting in the novel’s closing, the book title’s meaning emerges. Here the journalist and other travelers who have escaped the horrors of the occupied Czech terrain observe once again from the plane window, happy to have crossed the Rhine and be over France. 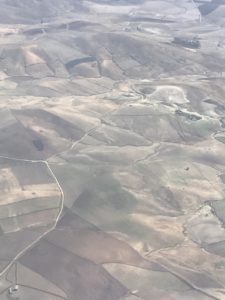 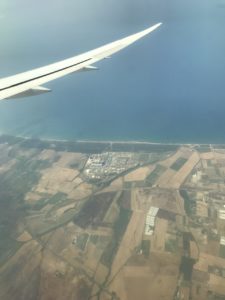 Fertile fields along the Italian coast near Rome–another privileged view

Yet as the journalist gazes “down at the neat fields, brown and green, purple brown, yellow” she recognizes even more than she had months before—“the land doesn’t look any different . . . the land doesn’t look different at all.” What has “stricken” the “field” are the behaviors of people within it, and those infectious actions might happen anywhere. As she returns to France, where the fields are not stricken, she struggles with what she will choose to remember and what she will easily forget.

A False Sense of Security and Privilege

The irony for readers today, of course, is that we recognize the travelers’ and the journalist’s false sense of security and privilege—for France soon will be occupied as well. A Stricken Field becomes a metaphor not merely for the Czech’s land but for almost all of Europe. The journalist’s privileged escape is only temporary and in a physical world rather than in her emotional state.

Gellhorn’s tale resonated even more with me a month after I read it—by mid-March—and now. When my copy arrived in February, news of the corona virus outbreak in Wuhan was becoming more on our radar, as the virus had made its way to western Washington. But I was reading with plans of my own privileged spring break trip yet ahead. A month later, when my trip had been cancelled and I couldn’t even enjoy a pizza out at a local pub with friends, as I reflected on Gellhorn’s Stricken Field, I realized that China’s virus outbreak had become Italy’s and Italy’s had spread to Prague and other parts of Europe. Soon the outbreak would become our own. Our son was headed home, with thousands of other American university students, and we would not be traveling.  No perspective of privilege would prevent the impact.

In a few days I’ll be discussing another mistaken “perspective of privilege.” This time it will be an American journalist in 19th century Rome who wrestled with cholera and Roman fever as she shared the news with readers in the US. My discussion of Anne Hampton Brewster‘s writings is part of a webinar series sponsored by the Library Company of Philadelphia. The webinar is FREE, but you do need to register through the web page for the series.  I hope you’ll tune in to have your thinking piqued about quarantine and our relationships with those around us. History continues to speak. It teaches those who are willing to listen.

[i] Rioux’s phrase has since been picked up by Amazon and by the University of Chicago Press, who published a reprint of the 1940 novel in 2011.