More than a Haunted Cemetery: Public Humanities Past & Present 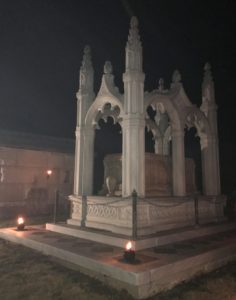 A tour at Mount Mora Cemetery in St. Joseph last week gave me much more than a Halloween scare.  It connected me “with the people, places and ideas that shape our society.” This phrase from the Missouri Humanities Council, one of the tour sponsors, markets its mission as “to enrich lives and strengthen communities,” as well as to connect people with ideas. Like events I experienced many years ago in New Hampshire, this one confirmed my belief that while our world continually changes, the value of public scholarship does not.

My eyes might have glazed over as I read the Missouri Humanities mission statement–had it not awakened memories. This phrase about “people” and “ideas,” on the table at my first board meeting of the Missouri organization, resonated with one I heard thirty years ago. Then, I was working with the New Hampshire Humanities Council. “Connecting People with Ideas” was our new brand. We called them slogans then, but the idea was the same. The phrase rang out our dedication to bringing public programming to people in the Granite State. 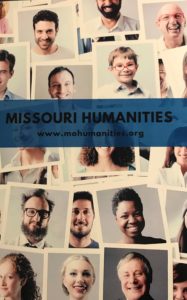 Now New Hampshire Humanities, the organization had supported a young Ken Burns, with his film on the Shakers, Hands to Work, Hearts to God. We had recognized Donald Hall when he was poet laureate for the state, long before he was honored with that role for the country.  And we celebrated the bicentennial of the ratification of the US constitution, with speakers such as Laurel Thatcher Ulrich, before she won a Pulitzer in history for The Midwife’s Tale. What I witnessed then was how the organization fostered the intellectual and creative productivity of people such as Burns, Hall and Ulrich. They were concerned not with themselves and their own fame but with ideas–ideas they believed would touch lives of local people. And they were correct.

Gatherings with each of these articulate, wise authors touched the broader public and still resonate for me. They remind me of the value of humanities scholarship made public–for how it enriches the lives of those who hear or see it. Last week, I had a similar experience in St. Joseph, Missouri.

In the evening air of Mount Mora Cemetery, rather than in a lecture hall, local actors and actresses gave voice to the early settlement town’s prominent figures.

Standing on Mausoleum Row, surrounded by a community of interested others, we felt history come to life. 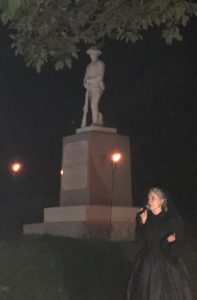 We heard of the town’s European settlement by a French fur trader Joseph Robidoux of St. Louis, hired by the American Fur Company to establish a post in the Blacksnake Hills. We learned of Robidoux’s interactions with the indigenous Osage and Creek peoples and his later “negotiations” with the Ioway, Sac and Fox tribes. From Robidoux’s third wife, Angelique, we learned that his second was an indigenous woman and that their daughter, Mary, married Ioway chief Francis White Cloud.

Jeffrey Deroine, Robidoux’s former slave, explained that although he was fluent in several languages and served as an interpreter with the natives, he died “illiterate” by mainstream Anglo standards. (The term “illiterate”  reminds me of the various types of literacies that exist, and the difference between high levels of proficiency with spoken languages and the skills of inscribing and interpreting texts.) 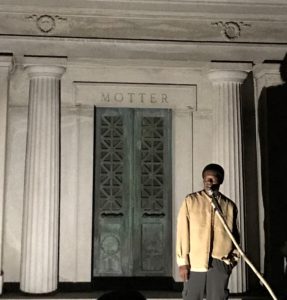 This status remained even after his friends bought his freedom from his abusive owner and he worked for the US government.

Robidoux’s work for the US government platting of the area brought some people rushing west in response. But others migrated more slowly. Among these were the Scotch-Irish Kempers from Kentucky. We learned from Simeon Kemper that he and his wife lost not only a 35-room house due to the Civil War but also three sons in the brutal conflict–two fought as Union soldiers and one as a Confederate. Kemper’s message was haunting indeed, in today’s divided nation. 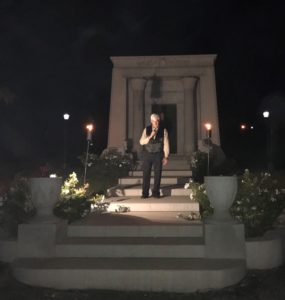 Some might have expected the Mount Mora tour to be haunting in other ways, but the emotional shivers sent through the cemetery’s air came from how real these horrors of the past continue to be. The local actors were neither Pulitzer-prize winning authors nor famous filmmakers. But  like Ulrich,  Hall and Burns, they care about how the past informs our present. And they know how such stories can direct our future. What might we learn from these stories of indigenous and European interactions? from the injustices of slavery that continue as social injustices today? Of families divided over political and economic differences that erupt in warfare?

While witnessing these figures bring the past to life, I made another note of what moved me. None of the actors was young. Nor were those of us in the supportive crowd.  The roar from the nearby football stadium and its Friday night lights signaled loudly enough where some of the younger set was. Some say history and education are wasted on the young. As a mother of two sons who love history and an educator, I won’t go that far.

But I will add that many of us, as we garner experiences with our gray hairs, become  interested in the lives of those who have gone before. We reach out to read about our ancestors. We want to learn about our origins. We get our 23andMe results. But we also want to know about people who took different paths. We want to know of the Robidouxs and the Kempers and the Deroines and the White Clouds. What drove them? What kept them going?  And, when they found what they loved–a place, a person, a creative passion–how did it feed their daily lives? How did it foster their “next steps”?

“many of us, as we garner experiences with our gray hairs, become  interested in the lives of those who have gone before . . .”

In the coming months I will be writing here about my research in the lives of nineteenth-century Americans whose journeys took them on different paths. I’m zooming in on a newspaper correspondent, Anne Hampton Brewster; an ambassador’s wife, Caroline Crane Marsh; and an activist Emily Bliss Gould, who established an orphanage and industrial school in Rome. The three followed what I refer to as “later vocations”–callings that in their earlier years they likely never imagined. Yes, all three were women, but their lives were not without men. Nor were the women’s decisions made without men’s influences–that’s an important part of their stories!

Some of you have heard me talk rather obsessively about these women. If you have not, you may be intrigued by how these women have haunted me as I have uncovered their paths. They speak to us–as do those souls in St. Joseph’s Mount Mora cemetery–as we reflect on where we are now, how we got here, and where we might go. May the ideas I share resonate with you on your journey, as you come to better understand the people and places that shape our society.