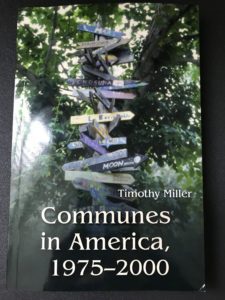 For anyone interested in alternative communities in the US, Tim Miller’s book on the last quarter of the 20th century is a thorough and accessible read. Miller started studying and writing about communal life as a young scholar of American religious history. No one can delve into that topic without encountering such groups.
(I am a case in point–I first published on New England Puritans, then the Shakers, followed by the Quakers. More recently, I have written about two spiritual communities in Italy’s Piedmont, Damanhur and Villaggio Verde.) Miller made his way into 1960s communes as a sub-specialty, and this book reflects that work.
Communes in America is the last in a trilogy, though. The first two focus on the earlier parts of the 20th century. With a broad foundation in America’s past, Miller writes authoritatively, accurately and accessibly.  This final volume is a fine example of his work.

Yes, Miller writes about Jim Jones and People’s Temple, the Branch Davidians near Waco, and Fundamentalists Latter Day Saints, among many other groups you likely never knew about.

My longer review of the book appeared last week in Religion, State and Society. The journal is allowing free access for the first several viewers, so I’m providing the link below to anyone who is interested in reading more. It may help you decide whether to buy the book.

Here’s a little bit of my review:

“For readers interested in church–state relations, Miller’s final chapter ‘Communities in the Media Spotlight: Crisis and Controversy’ is the richest. Here he explains that the communities that have made the media spotlight have done so because of crises, which are not the norm but rather the exception. The reasons for these crises, he explains, are both internal and external issues and differ little from crises that occur in US culture outside of communities. . . .

One example of an internal crisis that bled into an external one was the leadership of People’s Temple. Jim Jones (1931–1978), a charismatic Protestant minister initially in Indiana, eventually led followers to California and Guyana, where they established the community known as Jonestown. Many of them later drank Fla-Vor-Aid laced with cyanide in 1978. Increasingly disturbed by mental illness and drug abuse, Jones’ behaviours included involvement in the death of California Congressman Leo Ryan and several reporters, who had arrived at Jonestown to investigate the community following a child custody case with defectors. Behaviours such as Jones’ are the exception rather than the rule, Miller asserts.”

Traveling to Monasteries: One Part of a Larger Journey