The Past Hauntingly Repeats Itself? National Elections of 1844 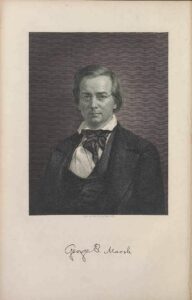 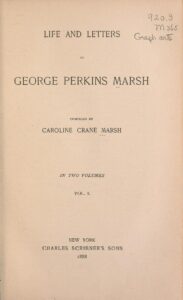 As presidential election news was pouring into Washington, DC,  in early November, 1844, a junior US congressman captured visions of the city:

“The excitement was intense. Torch-light processions paraded the streets with wild hurrahs; heavy guns were firing, now by one party, now by another, according to the latest news received. At last, an hour after midnight, a yell of triumph, protracted, hideous, demoniac, rang out from one end of the city to the other. There was no occasion to ask questions. Everybody knew what it meant.”

“Early the next morning,” the congressman, George Perkins Marsh of Vermont, “called a friend to the window and pointed out a huge flag floating over a distant quarter of the town. ‘Do you know what that flag is waving over?’ he asked, with an excitement of manner very rare with him. ‘There is the Slave Market of Washington! and that flag means Texas; and Texas means civil war, before we have done with it.'”

Marsh had spoken out against slavery and the annexation of the Republic of Texas in the period leading up to the election. As this passage from his biography records the events, Marsh appears to have been a bit in shock and dismay at the nation’s division and the election results.

It would be more than a decade before the Civil War would officially erupt, but Marsh was prophetic in his prediction.

Let’s hope that our coming election night is not so fierce and that the past does not repeat itself. 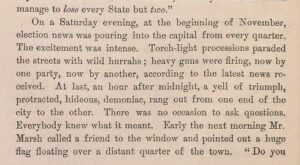 a excerpt from Life & Letters of George Perkins Marsh (1888)

Marsh’s political career and his years as an early environmentalist, a co-founder of the Smithsonian Institution, a scholar of languages and as  a US ambassador abroad in the Ottoman Empire were recorded first in The Life and Letters of George Perkins Marsh (1888) a biography composed by his wife, Caroline. The second volume she composed, never published, includes the record of his twenty-year career as US Minister Plenipotentiary to Italy.

See more about Caroline Crane Marsh and her time in Italy in my blog on the New York Public Library Archives website and an article in Transatlantica. She’s featured in my forthcoming book, Engaging Italy: American Women’s Utopian Visions and Transnational Networks.

Follow me on social medial or subscribe to my website blog for more entries on American women writers such as Caroline and their relevance to contemporary culture.