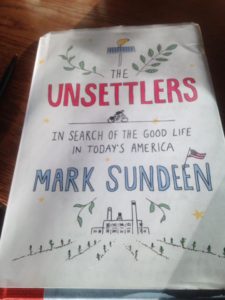 Mark Sundeen’s The Unsettlers: In Search of the Good Life in Today’s America ranks among the most interesting new books I read in 2017.  Here are some highlights from my  review of it, which appeared in Communal Societies a few months ago. Perhaps these lines  will intrigue you, if you’re looking for a few more titles for your winter reading list.

In this piece of “immersive journalism,” Sundeen explores three contemporary couples  whose searches for “the good life” took them down paths to lifestyles different from those of most Americans. His intensive interview time with the Possibility Alliance in La Plata, Missouri, Brother Nature Produce in urban Detroit and Lifeline Farms in Montana’s Bitterroot Valley, contribute to a story that is both personal and engaging.

With echoes of Henry David Thoreau’s apology for his two years at Walden Pond, Sundeen explains his motivation:

“I wanted to see if living along lines of radical simplicity brought a deeper, truer relationship to land, livelihood, economy, and spirit. . . . What I wanted to learn was how to lead a good life.”

Sundeen’s past experiences–before journalistic authorship–also pushed him toward this topic. With years of outdoor work experience, plus lots of travel, he, too, had been often in search of something other than a career “tethered to a screen”  and enslaved by capitalism.

With this personal background revealed. Sundeen places himself, his humor, and his occasional skepticism into the immersive experiences. These occur primarily in the three featured sites of the diverse American landscape. But other locales, such as Brooklyn and rural France, emerge as well.  And he sinks the stories of Sarah, Ethan, Olivia, Greg, Luci and Steve into the larger context of America’s many utopian and communal experiments. Their personal histories with alternative agricultural practices, in particular, come to life within this larger context. Sundeen discusses movements as diverse as the celibate, religious Shakers of the nineteenth-century and Stephen Gaskin’s the Farm, a latter-twentieth century enclave that continues today as an educational site.

This larger context of communal, utopian practices is what drew me to his book, of course. (It also explains why my review appeared in the latest issue of the Communal Studies Association journal.) Sundeen’s interviews should interest others, however. Those skeptical about or interested in urban agricultural practices should be enlightened by Brother Nature Produce and its history in Detroit.  They should find fascinating the longstanding but changing organic practices in Montana’s Bitterroot Valley. And the Possibility Alliance in northeastern Missouri draws interest because of its attempts to live off the grid.

Sundeen and his subjects have certain heroes whose names continually resurface. Chief among them: Wendell Berry (his The Unsettling of America influenced this book’s title) and Mahatma Ghandi. Their beliefs capture a spirituality, self-discipline, and social activism that Sundeen believes many liberals don’t quite understand.

Many liberals talk a good talk, but when it comes to walking the walk, well, they’d rather drive.

By contrast, his subjects make sacrifices in order to share their visions of how the world might become a better place.

Stylistically, The Unsettlers reverberates with the tone of J. C. Hallman’s In Utopia (St. Martin’s). Also like Hallman’s book, Sundeen’s study provides a broad historical context for this topic of living intentionally.  It, too, is worth a read. 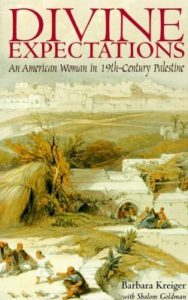 Divine Expectations is one such book. Since it was published fifteen years ago, interest in the Mid-East has certainly increased. Although now the US war against ISIS complicates language of Israeli-Palestinian conflicts, themes of religious differences in this ravaged zone continue to loom large. Add to these contemporary interests the fascinating story Barbara Kreiger tells in this book. Her focus: American Clorinda Strong Minor (1809-55), who spent the last five years of her short life in Palestine.

Devoted to a utopian vision of agricultural improvements and spiritual development, Clorinda Minor traveled as a married female without her husband. While on journey she wrestled not only with cultures and languages new to her but also with new technologies. A neophyte to rural farm life, she believed in a future heaven on earth–an ushering in of Christ’s kingdom–in the crescent of the world that has interested Americans and Europeans for centuries. The role of the Jews there, she believed, was essential to the divine kingdom that had been prophesied.

For those who know nothing of Americans in Palestine in the nineteenth century, the expedition in which Minor was  a part opens up views of global relations that go beyond typical evangelistic missions and economic imperatives. By zooming in on specific individuals, Kreiger brings to life the realities of loneliness and personal hungers. In addition to Minor, for example, Kreiger tells the story of John Meshullam, a convert from Judaism to Christianity. Dedicated to farming although also a hotel proprietor and successful businessman, Meshullam was crucial to Minor’s successes. The life experiences of both these transnational travelers included strong desires to achieve. At the same time,  their driveness sometimes contributed to conflicts in their utopian efforts and communities.

Firmly grounded in research and well-documented, Divine Expectations contains clear prose. Approximately a dozen illustrations from nineteenth-century publications recreate what Americans then were envisioning as they read about the Holy Land. Kreiger gives readers a story whose narrative arc demonstrates dreams, struggles, triumphs and failures, both large and small.  Overall, this American woman’s journey included engaging those around her in a vision of social improvement.

I loved this book so much that I bought it for my mother-in-law! Her interest in travel, history and religion suggests Kreiger’s work will engage her as much as it did me.

View all my reviews at Goodreads

In the spring of 1962, within a month of my birth and just before his death, Lobzang Jivaka finished composing his spiritual autobiography in India. Almost fifty years before and half-way round the world, he had been named at birth Maude Laura Dillon in the Ladbroke Grove neighborhood of Kensington, a now-posh borough of greater London. 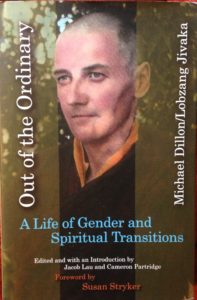 While my young parents were adjusting to life with a third child in suburban New Orleans and wrestling with a cultural change from rural Arkansas, this Buddhist monk was revisiting his life’s journey. Writing this memoir of “transitions,” from declared female at birth, to living through one of the first medical sex changes in history and re-registering as Michael, was the last of his many accomplishments. These and his transformations–through undergraduate studies at Oxford and medical school at Dublin’s Trinity College, serving as a naval physician and finding his way to Tibetan Buddhism–are the focus of Out of the Ordinary: A Life of Gender and Spiritual Transitions (Fordham UP, 2016).

Although completed more than a half-century ago, the account of this “evolution,” as he shared it, has only been published recently. What kept Dillon/Jivaka’s story from the light? END_OF_DOCUMENT_TOKEN_TO_BE_REPLACED

“Savory Bites: Books on Eating in Early America,” appeared in Early American Literature 50.2 (2015).  On the hot topic of food and literature, it considers three books on American literature and culture from colonial exploration through Reconstruction:  Ann Chandonnet’s Colonial Food (Shire 2013); Michael A. LaCombe’s Political Gastronomy: Food and Authority in the English Atlantic World (U Pennsylvania P 2012); and Kyla Wazana Tompkins’s Racial Indigestion: Eating Bodies in the 19th Century (New York UP 2012). The essay places these books within the context of American food studies and the teaching of American literature.

As the first two volumes discuss, for Native Americans and European colonial explorers and settlers, food exchanges were not only crucial to survival but also highly symbolic. Hospitality among strangers is key among food practices that identify cultures.  Tompkins’s book takes a more grim approach to cultural differences. Consuming the other appears figuratively and frequently in American literature and culture, from the post-Revolutionary era through the 19th century.  In sum, what we share indicates who we are, just as what we eat determines who we are.

Jhumpa Lahiri begins her memoir of two years in Italy with a water metaphor. Rather than thirst in Rome’s heat or a watery rebirth, the imagery of swimming around a lake seduced me. So starts Lahiri’s story of writing in a language neither her parents’ Bengali nor the English she learned easily in pre-school in the U.S. While English is the language in which she writes most proficiently, deftly carving her Pulitzer-prize-winning fiction, Lahiri chose to write this first-person account of living abroad in Italian.

Likely my love of swimming—especially in natural mountain lakes like the one she describes in her opening—as well as my love of Italian, drew me in to Lahiri’s tale. But the story itself kept me reading. Rather than the typical travel or expatriate narrative of recent years (think Elizabeth Gilbert’s Eat, Pray, Love or Frances Mayes’s Under the Tuscan Sun), Lahiri’s journey is not one of an American consuming food, drink and culture. There is no gelato, nary a glass of wine. END_OF_DOCUMENT_TOKEN_TO_BE_REPLACED